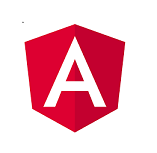 AngularJS (commonly referred to as "Angular.js" or "AngularJS 1.X") is a JavaScript-based open-source front-end web application framework mainly maintained by Google and by a community of individuals and corporations to address many of the challenges encountered in developing single-page applications. The JavaScript components complement Apache Cordova, the framework used for developing cross-platform mobile apps. It aims to simplify both the development and the testing of such applications by providing a framework for client-side model–view–controller (MVC) and model–view–viewmodel (MVVM) architectures, along with components commonly used in rich Internet applications. In 2014, the original AngularJS team began working on Angular (Application Platform).

The AngularJS framework works by first reading the HTML page, which has embedded into it additional custom tag attributes. Angular interprets those attributes as directives to bind input or output parts of the page to a model that is represented by standard JavaScript variables. The values of those JavaScript variables can be manually set within the code, or retrieved from static or dynamic JSON resources.

According to JavaScript analytics service Libscore, AngularJS is used on the websites of Wolfram Alpha, NBC, Walgreens, Intel, Sprint, ABC News, and approximately 12,000 other sites out of 1 million tested in October 2016. AngularJS is the 6th most starred project of all time on GitHub.

AngularJS is built on the belief that declarative programming should be used to create user interfaces and connect software components, while imperative programming is better suited to defining an application's business logic. The framework adapts and extends traditional HTML to present dynamic content through two-way data-binding that allows for the automatic synchronization of models and views. As a result, AngularJS de-emphasizes explicit DOM manipulation with the goal of improving testability and performance.

Angular implements the MVC pattern to separate presentation, data, and logic components. Using dependency injection, Angular brings traditionally server-side services, such as view-dependent controllers, to client-side web applications. Consequently, much of the burden on the server can be reduced.